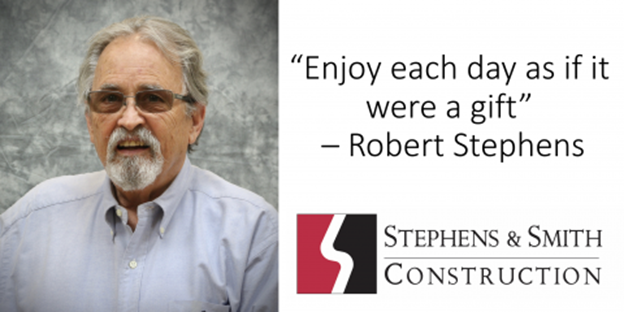 Bob Stephens has spent decades creating opportunities for men and women during his accomplished 48-year career at Stephens & Smith Construction Company.  We all recognize and appreciate the valuable contributions he has made to our organization and our community.  The skills, knowledge, and other qualities that Bob has instilled in us have helped shape each of our careers.  Today, we would like to express our gratitude to Bob for his contributions not only to this organization but to all the employee owner’s at Stephens and Smith.

Robert Lee Stephens was born August 21st, 1948.  His parents were Jack Lee Stephens and Eva Vera Stephens.  Tragically, Bob’s father was killed in an automobile accident when he was very young.  When Bob was 5, Eva moved Bob and older sister Pat to Lincoln, and settled in the Irving neighborhood in South Lincoln.

Bob met his longtime friend and future business partner, Mike Smith, while attending Irving Jr. High. Little did either realize what the future would hold for them. Bob made some early money with the typical boyhood jobs, shoveling snow, delivering newspapers, but formed his first partnership with Mike by starting a lawn service at age 16. Bob and Mike would line up the work, and then they would recruit neighborhood kids to do the labor. Often, they were only paid 50% of what Bob & Mike actually were charging. Not a bad profit for the young entrepreneurs.

Bob & Mike’s friendship continued to grow throughout the years, and both graduated from Lincoln High in 1966.  Bob attended UNL for a year, but decided he liked being more hands on, and worked for various construction companies from 1967-71, Mike attend Southeast community College, but missed being in construction and joined back up with Bob. They were good at their craft and would often be asked to moonlight and do extra work after hours for customers doing side work. Soon, they had more side jobs than they could get done, so they decided to quit their regular job and form their own construction company.  They started out by pooling $160 in 1971 to start their own business.  They earned their capital startup money by doing a small sidewalk replacement project.

In the earlier years, they were home builders, doing all of their own work from the ground up. They were very good at concrete, and soon were being asked by other builders to do their concrete work for them as well. Rumor has it, a flip of a coin determined that Bob would be President of the company and Mike Smith would be Vice President.

But there was more to the business than just concrete for Bob. He was very involved with forming multiple companies with other partners and was active civically as well.  In 1976 he helped form Infinity Development and was one of the first in Lincoln to build self-storage units and mini-shops. Today, Infinity has over 115,000 SF of storage space. Real Estate Investment Properties, or RIP, was formed in 1988 as a subsidiary company of Stephens & Smith. RIP owns and manages the various properties and projects that are built by Stephens & Smith as investment and wealth building properties. To date, this includes 6 different apartment complexes in Lincoln and Bellevue, that house 666 dwelling units with 1,408 bedrooms. RIP also owns storage complexes, with over 320,000 SF of storage available at 4 locations.

Robert has served and dedicated many hours to the Citizens of Lincoln and the State of Nebraska.  He was the President of the Home Builders Association of Lincoln in 1981; served four years on the Nebraska Mortgage Finance Fund in 1983, which later became NIFA and helped secure low interest loans for first time home buyers; served as the President of the Nebraska State Home Builders Association in 1987; served on the Lincoln Lancaster County Planning commission from 1989 to 1998 with two years as chairman and was named Business of the Year by the Lincoln Independent Business Association in 2000.

Bob has assisted in several Habitat for Humanity build projects and served on their Board of Directors. On a national level, Bob helped with Builders for Christ, and assisted in the building of multiple churches across the country.  Bob truly encompasses the Good Life with his community involvement, hard work and dedication to his business, employees and the community.

In 1999 an Employee Stock Ownership Plan or ESOP was put into place.  Through the ESOP, all Stephens & Smith employees are owners in the company, which truly allows us to say we have “An owner on Every Project”.  Not only are we owners but we are also known as the original “Ass Busters”.  A title that over 220 current employees can proudly claim.

Bob has dedicated his life and career to the construction industry.  He has provided gainful and meaningful employment to hundreds if not thousands of employees giving them and their families opportunity for personal, professional, and financial growth and advancement.  His efforts have helped to build countless projects, homes, and businesses in the Lincoln and surrounding areas.  Bob has volunteered and contributed his time, expertise, and leadership to multiple civic, professional, and religious groups and organizations in our community that has had an impact in improving the quality of life for countless individuals.  Overall, it is without a doubt, Robert L. Stephens efforts have helped to stimulate the economy of Lincoln, the Region, and the Greater State of Nebraska.

Bob, you are one of the great concrete professionals of the construction industry.  You have made a lasting impression on the world through involving the lives of your family members, work colleagues and employees. Thank you for being our leader and guiding us. We truly value all the efforts you have made. Thank you.